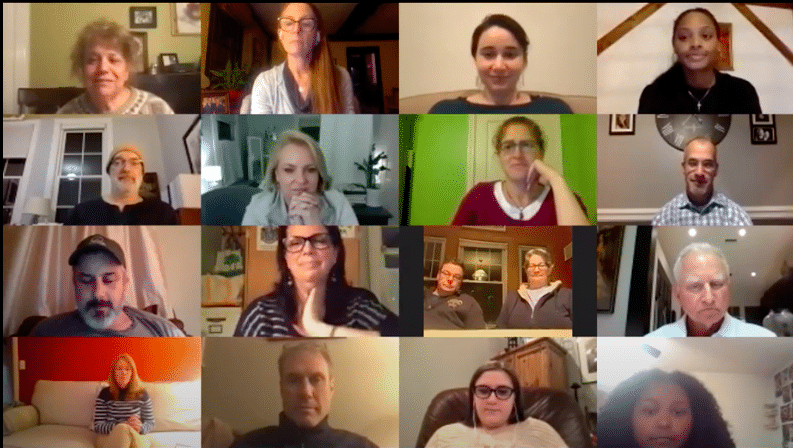 Teaching and Learning: Design and Execution

I graduated from Watkinson in 1986. During my time as a student, the skills prized by Watkinson faculty and commonly held by my Watkinson peers included the ability to use one’s voice well in and out of the classroom and the ability to work collaboratively and creatively. A week ago, I attended a Zoom conversation with Watkinson parents where three teachers presented their conceptualization and goals for a unit of learning and then one of each of their students spoke about being a practitioner of the assignment. I was both riveted and blown away by the maturation of these concepts in 2021 teaching and learning at Watkinson.

“She is astonishing,” I wrote in the chat to Jenni French, Watkinson’s Director of Communication who was moderating the Zoom conversation, as we were listening to Angelique, a senior, talk about the work she has done so far on her Senior Project. In fact, she was the third of three equally astonishing students to speak to us.

Elissa, an eighth grader, was the first. She has known since the sixth grade, she told us, that she wanted to study Congressman John Lewis for her 8th-Grade Civil Rights Project. He had been her hero since the third grade; his speeches were inspiring to her, and his death this year she felt as a personal loss. She said, her project would be a way to honor him, and it was striking to hear her admit that her initial research resulted in a dry collection of facts. After encouragement to dig more deeply into his life and personality, she arrived at a richer understanding of his words and legacy that had been a part of her for years. When someone on the Zoom call asked her what Lewis’s idea of “getting into good trouble” meant to her, her response was startlingly mature in its simplicity and nuance: “understanding, being educated in what you’re doing, and being active.”

In high school, I was good at math. I even got the math award at graduation. My sister and I vied for the highest scores in geometry on tests and quizzes during my junior (her senior) year. So on the Zoom call, I was enthralled by the ebullience that Zoe, a tenth grader, expressed toward the art project she did on Triangle Congruence. This unit, created by Upper School Math Teacher Arielle Martins, uses creativity to help students develop some fundamental tools that they need for solving complicated proofs. Math was not something that always came easily to her, Zoe said, but as a visual learner, the assignment triggered her artistic sensibilities. The infectious zeal with which she shared her beautifully rendered triangle “characters” did not overshadow her acute awareness that, through this playful engagement, the math had sunk in.

Which brings me back to Angelique, whose Senior project is about the experience of Caribbean immigrants in Connecticut, and who spoke effortlessly about the volumes of research she has done. It was clear that everything she learned made an impression on her and compelled her to learn more, that the learning itself had become the engine to continue learning. She said, by the 2000s, one in ten Black Americans was an immigrant or child of an immigrant, which is crazy. One in ten. The breathless emphasis she employed linked directly back to interviews she had conducted during her junior year with her parents, both immigrants from Caribbean nations. The interviews were for a Global Studies assignment that gave students an opportunity to try out ideas for their Senior Projects. Her mother got quite emotional when recounting the moment she left St. Lucia, and right after the interview, Angelique told us, her mother confessed that no one had ever asked her about her experience before. After hearing her mother say that, and to be driven to hear the experiences of other immigrants, and to then make and put a documentary film of those stories out into the world: to me that is astonishing.

I don’t interact much with students in my job. In their senior year I get to know them a little bit, but I mostly work with the faculty and staff, the board members, parents, and visitors from the outside world. I was on that Zoom call, to be honest, in case Jenni needed help with anything. She didn’t, unsurprisingly, and so I was allowed to sit and listen and get drawn up into Watkinson’s daily dynamic: everyone continuously learning. The diligence with which my colleagues consider, craft, hone, and recraft their courses; the tenacity of the students to question, struggle, comprehend and reflect on their understanding; it’s good to be reminded of what goes on here, to be reminded of the purpose of school. For me, It is profound.

Watkinson’s mission is to develop in our students the power to shape their lives and the world around them.

Founded in 1881, Watkinson School is an independent, coeducational day school for students from grades 6–PG with a legacy of leadership in progressive education.