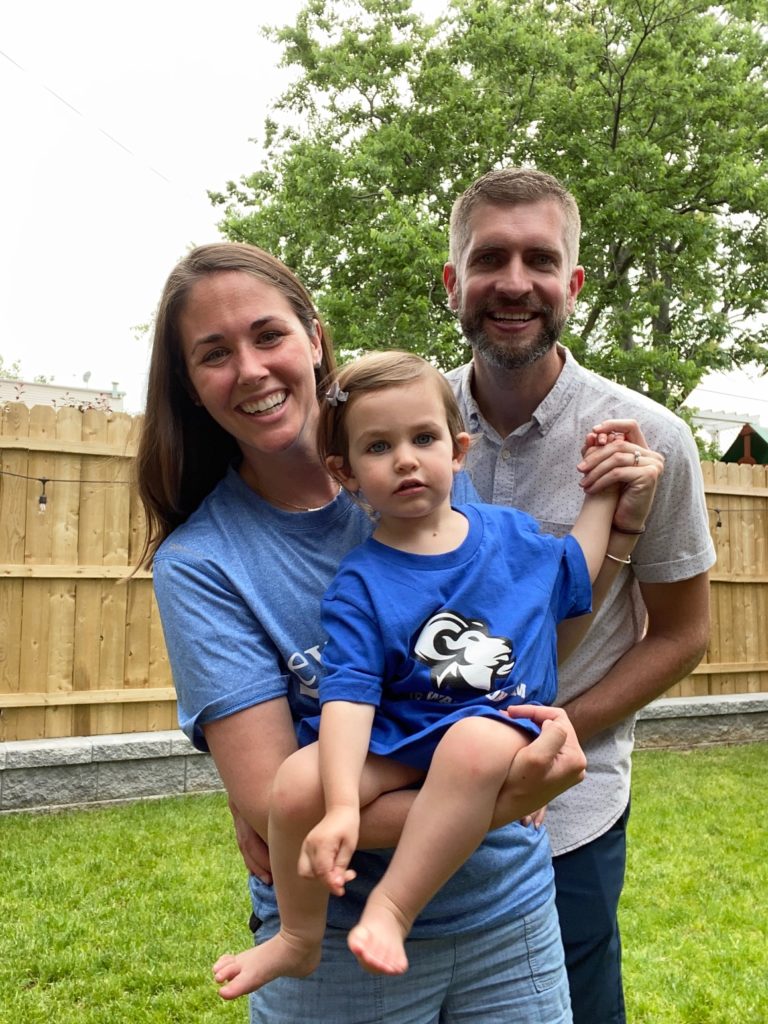 When chatting with Erin Burns-Maine ’04 about her time at Watkinson, her face lights up…even via Zoom!  While Erin still keeps in touch with her classmates, Kate Ely and Caitlin Mackeown, and she fondly recalled how she and Caitlin were the recipients of some older sibling hazing (by Darcy Maine ’02 and David Mackeown ’02), her real nostalgia was elicited when she recounted her Senior Project.

The senior project was piloted at Watkinson in 2003-04 and optional; only a handful of Erin’s class participated. Erin’s faculty advisor was Darcy Purinton, past English department chair.

Throughout high school, Erin had an interest in housing and homelessness. She remembers, “At the time I was digging into my senior project, I had just been accepted into Clark University early decision. It was a good moment to have the opportunity to channel my energy into something I was passionate about while still being guided by Watkinson.” She adds with a wry smile, “After all, I was only 18 years old.”

Looking back, Erin reflects, “The senior project was the first time I elevated my thinking beyond a bandaid assistance program. It was the first time I thought about big solutions. While working on my project, I talked to the Partnership for the Homeless in Hartford and attended city council meetings (which was great preparation because I spent many nights during my adult life in meetings). In fact, I was invited to sit at the dais and speak at one meeting; it was filmed on public access and felt like a big deal. Over the course of my work, I learned about Common Ground, which started in Brooklyn and had just come to Hartford. It was a supportive housing model, providing permanent affordable housing and support for people cycling through systems. My big learning from my project was that I started to understand and define ways you can make or systematize change.”

“At Watkinson, I learned about creative thinking and was taught to be comfortable and welcome dialogue around difficult subjects. I learned how to communicate with people well, skills I practiced while participating in United Through Differences (UTD) and Student Foundation.

“I remember Mr. Holdt used to often say, “Do your reading, but then think differently. In the government and policy realm, you have to be comfortable sticking your neck out. Once you are in the working world, it is important to be confident, especially if or when you need to dissent.

“A Senior Project encourages you to get out there and start doing the work that matters to you, don’t wait. YOU can do it today. If they offer a seat behind the dais, take it. Go sit there. For young women and people of color, traditional rooms haven’t been as welcoming. Being affirmatively told you belong is important. Representation does matter. Public policy and government can often be male dominated spaces. Throughout my project, I felt nothing but encouragement, which you really need when the rest of your industry doesn’t look like you.”

Erin continued volunteering to fight homelessness while at Clark. During her senior year, she did an accelerated masters, which included an internship off campus at the Central Massachusetts Housing Alliance where she did policy work, worked in affordable housing development, and helped take families to the state house to testify. “I enjoyed pushing the narrative on ending homeless, and bringing capital and resources to where it’s needed most.”

After college, she realized she needed government experience to know better how to effect change. “To get this insight, I worked with the NYC Housing Authority. I started there in the middle of a leadership change.” It was a very turbulent time to work at the NYCHA and she was able to gain experience at all levels of government.

Now, Erin is the Vice President of Policy at the Community Preservation Corporation, a community development finance institution. “I am building and directing a policy platform. It keeps me motivated because it’s about systemic change.  On the ground, you see lots of well-meaning people trying to help in a broken system.  I want to make the system less broken.” Erin is also mother to 18-month old Adelaide.  With a satisfied smile, she adds, “I have never worked harder; life is very full right now.”