“The key is having the ability to see a problem, have the critical and strategic thinking to address it, and the work ethic to transform it into something better. That’s what I took from Watkinson." 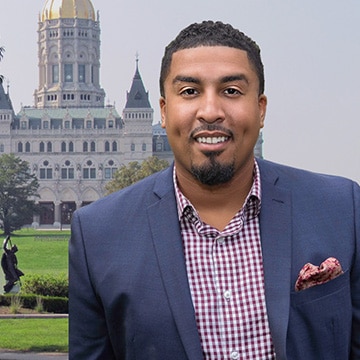 A natural leader in high school, receiving the Monique Colletti Leadership Award in 2007, and still a leader now, recently named to the Hartford Business Journal’s 40 Under 40 list in 2021, Manny was, is, and likely always will be a do-er.

A State Representative for the 24th District of the state of Connecticut and a Senior Development Officer for the University of Hartford, Manny is a busy guy. He says, “It is not easy to balance, but time management and being flexible are a must to be successful at both.

“At the University of Hartford, I work with alumni and friends of the University who want to give back. I love being able to work with folks who want to provide opportunities and have an impact on the lives of students. In my role as a State Representative, there is no greater feeling than giving back to my community and making a difference.”

Reflecting on his time at Watkinson, which in many ways laid the groundwork for what he does now, he adds, “Watkinson gave me many things. But what I’m most grateful for was learning how to set goals, think critically, overcome obstacles, be empathetic and value community service. Having a compassionate view of the world is important, but not enough. The key is having the ability to see a problem, have the critical and strategic thinking to address it, and the work ethic to transform it into something better. That’s what I took from Watkinson.”

Holding a public office is very challenging, especially at this moment in our nation’s history. However, leadership in politics is part of Manny’s family culture. It’s a natural fit for Manny, not only in terms of his skills, but also in terms of his family history. “My family has been active in politics as far as both sets of my grandparents can remember; from activism to holding elected office. My uncle, Bobby Sanchez, has been a State Representative for the last 10 years and my cousin, Patricia Billie Miller, is a former State Representative and current State Senator in Stamford, Connecticut. Bobby is the first person of color to represent New Britain at the state level and Patricia made history as the first woman and first person of color elected to the Senate from Stamford, placing two Black women in the Senate for the first time in Connecticut.”

Manny plans to celebrate Hispanic Heritage Month by attending events in his community and throughout the state, “to recognize the sacrifices, contributions and achievements made by so many, including the 65th Infantry Regiment (also known as “The Borinqueneers”), Sonia Sotomayor, Roberto Clemente, Miriam Jimenez Roman and Arturo Schomburg, to name a few.”

While we miss having Manny’s warm smile and jovial nature in the halls of Watkinson on a daily basis, we are so proud of the ways he is shaping his life and world around him.

If you’d like to receive future everBLUE profiles by email, please send us your email address.